In the stands cheering on her teammates, seated in the front row of Tokyo’s Ariake Gymnastic Centre, U.S gymnast Simone Biles looms large.

By now it’s well known why Biles is in the stands and not down below competing.

On Wednesday, USA Gymnastics announced that she would not participate in the women’s all-around final.

“After further medical evaluation, Simone Biles has withdrawn from the final individual all-around competition at the Tokyo Olympic Games, in order to focus on her mental health,” a statement from the governing body read.

Coming into Tokyo, Biles was undoubtedly the face of these Games, the centrepiece of the Games most important broadcaster NBC’s massive promotional campaign.

You could already picture the soft set Today Show interview with a beaming Biles, adorned with her gold medal, talking about her latest gymnastics triumph.

But instead of acquiescing to this role, Biles has instead become the voice of these Games, igniting a conversation among her fellow Olympians about how hard it can be to perform on the world’s biggest stage.

After withdrawing from the artistic gymnastics women’s team final, Simone Biles confirmed that she did not suffer a physical injury, but that she is putting her “mental health first.” 1:34

There is a reason Biles’ unexpected decision has athletes in Tokyo buzzing, unfurling honest conversations and personal stories of mental struggle.

What Biles did isn’t a mental health campaign transparently pushed by a corporate entity, but the honest voice of one of the greatest athletes ever.

That’s why it resonated with many of Canada’s top athletes in Tokyo.

“I commend her. It must have been a really difficult decision and I think a really courageous decision,” said Canada trampolinist Rosie MacLennan, who is in Tokyo looking for her third consecutive gold medal.

“I think she’s once again leading the way in a very different way than probably what she intended coming into these Games. I’m really proud of her. I think she’s setting a really strong example for other athletes as well.”

Even as athletes are celebrating their greatest athletic triumphs, they are now freely discussing the mental hurdles they have had to overcome on their journey to Tokyo.

“It’s incredible to also be able to know that for everyone back home that’s been going through their own struggles, my goal was to just kick my depression in the butt,'” rower Caileigh Filmer said moments after winning a bronze medal alongside Hillary Janssens.

Filmer said Biles speaking out has empowered her to be transparent about what went through to reach the podium.

WATCH | Sunisa Lee on teammate Biles’ withdrawal: ‘Nobody ever thought that this would happen’:

Lee discusses her unexpected gold medal win after her teammate Simone Biles pulled out of the all-around competition. 1:29

“I wouldn’t be here without Hillary and everyone that I have back home. And I hope that everyone just knows to keep the people around you tight and they’re going to support you and you can get through it.”

If anybody can relate to the burden that caused Biles to buckle, it’s Canadian gymnast Ellie Black, who has competed against the American sensation for years.

She’s also the only Canadian to ever to win an all-around medal at a world championship and knows all about dealing with pressure.

“Like Simone says, sometimes you feel like you have the weight of the world on your shoulders. And there’s a lot of expectations and pressure,” Black said.

Black points out that fans only see athletes performing at their highest level and,in the case of gymnastics, always smiling. She said fans don’t have insight or interest into the struggles that may be going on behind the smiles.

“It’s really amazing for Simone to be able to, on that world stage, recognize what she needs, to recognize that even though it’s the Olympics, her mental health, her personal health, it’s priority over an Olympic medal.”

There’s another factor at play, Black said, in the mental health awakening that’s unfolding in Tokyo. The Canadian said for many, the long COVID-19 delay that precipitated these Games, had a deep impact.

“It’s not just one athlete struggling. There’s crazy things happening. I think you almost don’t realize how hard it has been and then it kind of hits you all at once,” Black said.

“You’re not doing this for so long and then coming into the biggest level of competition, that weighs on you a lot. And it’s exhausting.”

Marnie McBean, a two-time gold medallist and Canada’s chef de mission here in Tokyo, said what Biles has done here in Tokyo will have a deep impact beyond these Games.

“The thing about mental health is the hardest part is finding the strength to reveal it,” McBean said. “And when somebody who is globally respected reveals it, it makes it a lot easier for someone to break that surface and get the help that they need.”

“What courage I thought it takes, you know, for her to understand that she doesn’t need this performance to know who she is. It doesn’t change the kind of athlete that we think she is. If anything, admitting to vulnerabilities makes us think more of her.”

USA Gymnastics says Biles may still compete in Tokyo in the individual events later this week. If she does, it’s likely she’ll add to her lengthy list of gymnastic accolades. But given what she has already achieved beyond the mat here in Tokyo, the question remains: does it really matter? 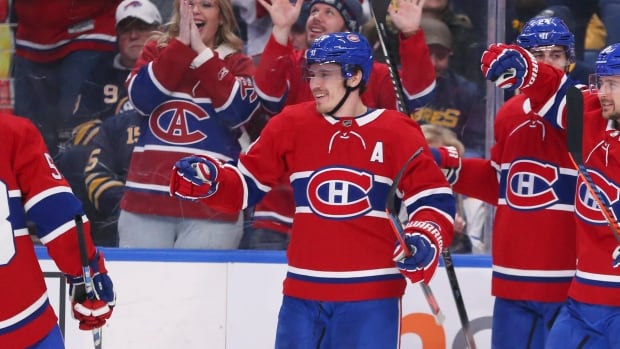 Habs triumphant over Sabres in Brendan Gallagher’s return from concussion