Home > Sports News > Backlund, Monahan each pot pair to help Flames get back at league-leading Bruins 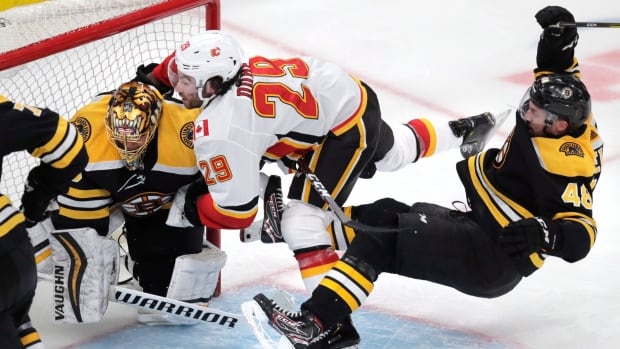 Sean Monahan scored a pair of goals 1:12 apart in the second period and the Calgary Flames beat the Boston Bruins 5-2 on Tuesday night.

Matthew Tkachuk had a goal and two assists for the Flames and Erik Gustafsson picked up an assist in his debut for Calgary after coming over in a deal with Chicago at Monday’s trade deadline.

Mikael Backlund also scored twice for Calgary, helping seal the win on a goal with 1:30 left in the third and adding an empty-netter in the final minute. The Flames remained on top of the Western Conference wild card standings with their first victory in Boston since Nov. 25, 2016.

Brad Marchand scored a shorthanded goal for the Bruins, who were playing their first home game since Feb. 15 and came out flat after a four-game road trip. The Bruins lost back-to-back games for the first time since a four-game skid in early December.

Marchand tied it at 1-all 10:08 into the second on a breakaway, scoring his 27th career shorthanded goal and extending his point streak to seven straight games.

Rob Pizzo tells you everything you need to know about who went where 2:43

The tie didn’t last long. Monahan scored his 20th of the season 13:25 into the second on a one-timer from the slot off a pass from Gaudreau, putting the Flames back up 2-1.

The Flames went on a power play when Boston’s Matt Grzelcyk was called for roughing 14:32 into the second. The Flames won the faceoff after the penalty and scored five seconds later when Monahan redirected a shot by Tkachuk.

Tkachuk put Calgary up 1-0 when he backhanded in a rebound after a slap shot by Backlund went wide and took a hard bounce off the end boards.

Wagner poked in a loose puck during a scrum 13:09 into the third to pull Boston within 3-2.

Backlund set himself up with a pass off the boards coming up the ice and beat Rask with 1:30 left in the third.