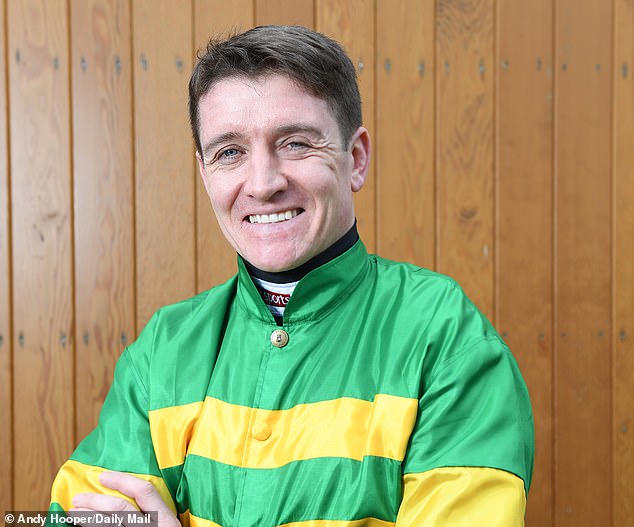 Just look at the numbers surrounding the attempt of Buveur D’Air to defend his title for a second time in the £450,000 Champion Hurdle.

Victory would make the eight-year-old gelding only the sixth horse to win the biggest hurdling prize in jump racing three times.

It would be an eighth win in the feature race on the opening day of the Festival for both Buveur D’Air’s trainer Nicky Henderson and his owner, Barry Geraghty’s boss JP McManus.

Success would also be a fourth in the contest for Geraghty and make him equal with Ruby Walsh and Tim Molony as the most successful jockeys in Champion Hurdle history.

That is why what unfolds over two miles and eight flights of hurdles in a little under four minutes adds up to such a big deal, even for a 39-year-old rider whose 36 Festival wins also include two Cheltenham Gold Cups and four Queen Mother Champion Chases.

It also matters to Geraghty that Buveur D’Air not only wins but receives the recognition he feels his achievements deserve.

That should follow automatically if Geraghty’s mount can repel the stiffest task he has arguably faced on this stage served up by Apple’s Jade and Laurina, two outstanding mares, trained respectively by the two giants of Irish jump racing, Gordon Elliott and Willie Mullins. 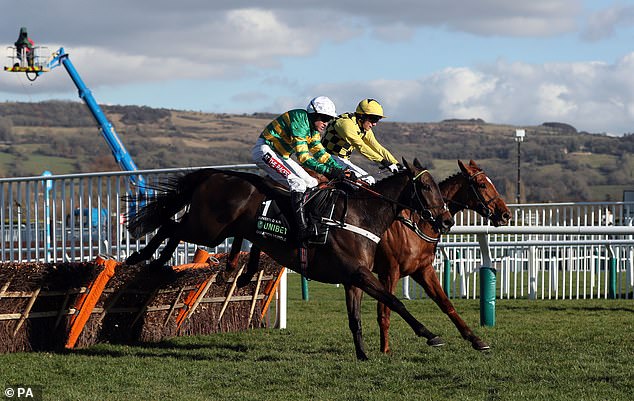 Geraghty whose mount must give away weight to both his big rivals, said: ‘This fella is the best hurdler I have ridden. He is lightning over his hurdles. When he gets it right, you can feel yourself making a length in the air. You close up or pass the lad in front of you. He is just so measured and calculated.

‘If he can pull it off, it will be up there with the best of what I have achieved with horses like Moscow Flyer and Sprinter Sacre.

‘I respect both mares but I wouldn’t be trading places. Apple’s Jade was very impressive when she won the Irish Champion at Leopardstown last month.

‘I was riding at Gordon Elliott’s last week and she looked a picture. She is probably the strongest opposition that Buveur D’Air has had to contend with in a Champion Hurdle.

‘By the same token, Buveur D’Air’s performance at Newcastle in December when he won the Fighting Fifth Hurdle was by far and away his best performance to date. You are hoping for a reproduction of that.

‘Laurina is more of an unknown quantity. We haven’t got to the bottom of her yet. She is a good mare who stays well. But she has been racing against her own sex. It is her first step into open company. We will have to see what she brings on the day.’ 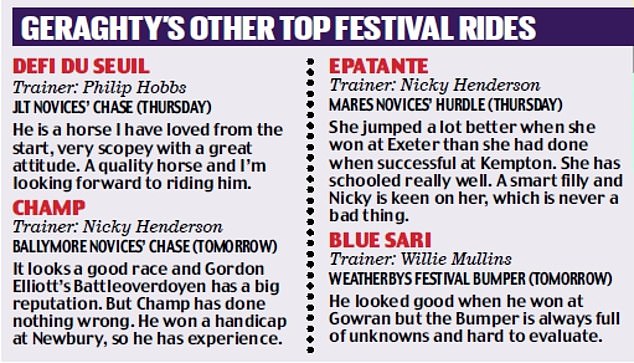 What Geraghty does concede is that Buveur D’Air will have to be better than last year, when he started 4-6 favourite but had to dig deep to beat Paul Townendridden Melon a neck.

It was a win which relied more on guts than glitz, with Henderson admitting that Buveur D’Air had probably picked up an infection from the horse stabled next door to him in the trainer’s Lambourn yard.

The efforts in retaining his crown were so draining that Buveur D’Air was unable to run again after Cheltenham last season.

Geraghty recalled: ‘He probably did not carry me through the race as well as I would have expected, but I was happy enough until the run down the hill, from the third hurdle out to two out.

‘Buveur D’Air was workmanlike and when Paul arrived on the scene going as well as he was, I was thinking, “we could be in trouble here”, but I thought as long as I could keep in touch, I could have one go on the run at the line and have him. That’s how it worked out. He won it the hard way.’

The slightly underwhelming win did not help Buveur D’Air’s cause for recognition, plus the fact that his first Champion Hurdle success in 2017 was under the radar in a season which started with two wins in novice chases before a switch back to hurdles, in part to sidestep stablemate Altior.

Noel Fehily was Buveur D’Air’s jockey that day, with Geraghty sidelined with five fractured ribs and a collapsed lung following a Kempton fall. But Geraghty  admits he would have chosen to ride the Alan King-trained favourite Yanworth, who was unplaced.

Buveur D’Air’s scintillating eight-length victory over Samcro in the Fighting Fifth Hurdle in December was followed by a surprise short-head defeat by stablemate Verdana Blue in the Christmas Hurdle on Boxing Day — a result that brought an end to his 11-race winning streak.

The loss left Geraghty ‘shellshocked’ but not despondent. He said: ‘He was not impressive last season when he beat The New One in the Christmas Hurdle. Kempton is not his best track. He also made a mistake at the third last which probably made the difference between winning and losing when you are talking millimetres in a photo-finish.

‘Apart from that, things have been good. He was only just tuned up enough for the day when he won his final prep-race at Sandown last month.

‘If you compare it to his prep before winning his first Champion Hurdle, it is probably a bit better than having won two chases! I schooled him last week and he went really well. His work is good. Fingers crossed he seems in good shape.’ 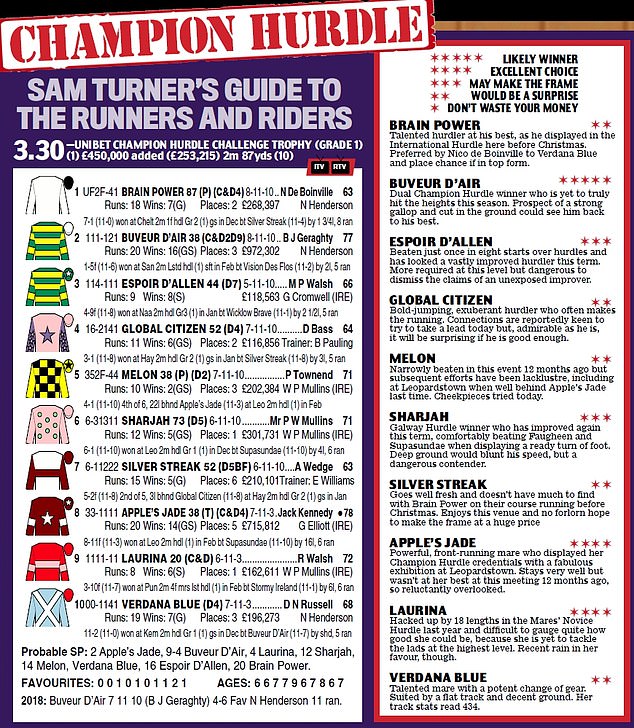 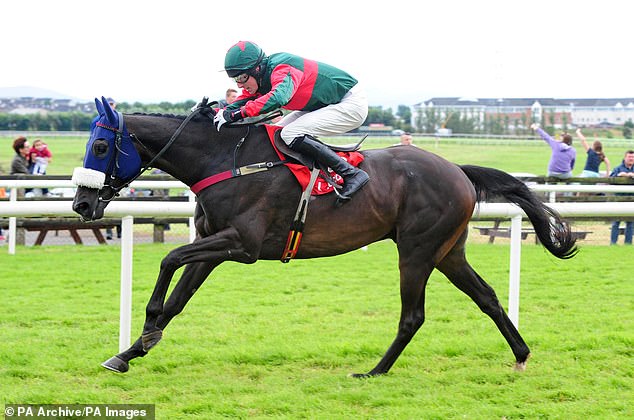 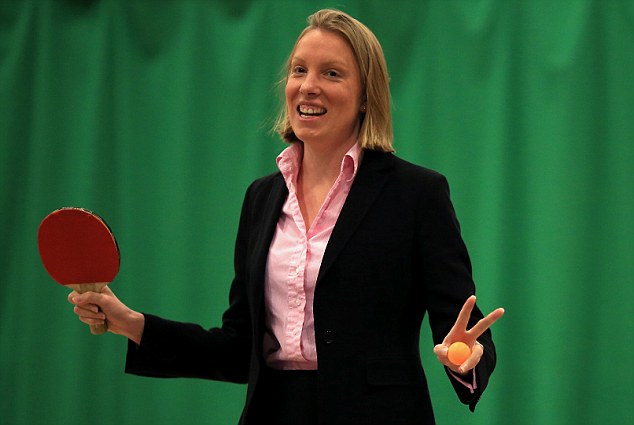 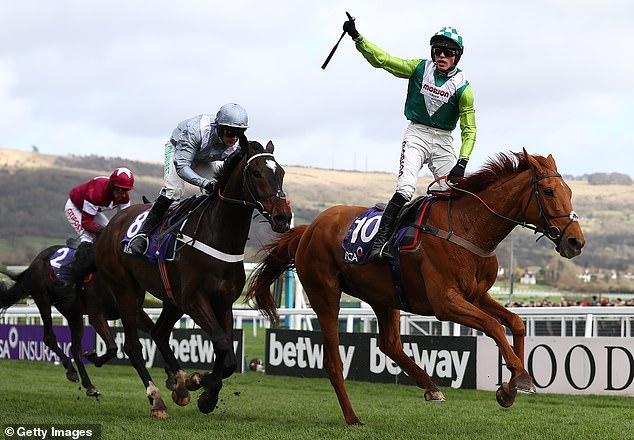